Bryan Brown performs as the Beast in the 2017 DreamWrights show “Beauty and the Beast.”

In 2017, an unknown stepped onto the DreamWrights stage. Ready to audition for “Beauty and the Beast,” he opened his mouth to sing and knocked the socks off the production team. That unknown, Bryan Brown, was cast as the Beast. And now, he returns to our stage for his second show and his second main role – as King Triton in The Little Mermaid, which opens Oct. 12.

Bryan lives in Maryland and back in 2017 was looking for places to get involved here in Pennsylvania. “DreamWrights immediately felt like a good place to be in the moment I walked in,” he said. When told the story of how he impressed the production crew back during Beauty and the Beast, Bryan laughs, adding he had been told he had a good voice but was shocked to get a callback. Not knowing the talent in the area, he was even more shocked to be cast as the lead male role.

While he’s moving from a mansion to the king of the sea, Bryan sees similarities in the two characters he’s played. They both have similar ways. The Beast in how he looked for love, and King Triton how he protects his kids and those he loves. 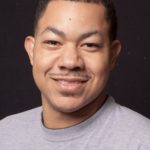 It’s been fun for Bryan to get to know Disney shows now as an adult. When it came to the Beast, Bryan said he now sees the Beast had been damaged by loss and having no one to turn to. As a kid, you don’t see all that, and it’s something Bryan said he could relate to. “I’ve got push out of my comfort zone to connect to feel that heartbreak,” Bryan said. “He doesn’t have to be that way.”

When it comes to Triton, he’s got seven kids to look out for. Bryan has no children and said he’s learning to step into the shoes of someone much older to learn how to play a father figure. How to be strict but still have a soft side. It’s something Bryan said has given him insight for if he becomes a father – how to balance the two.

For The Little Mermaid, Bryan said it’s been more challenging to learn the music. It takes a lot out of you to play such an iconic Disney character, he added. You have to put a lot of energy in so they see you as well as the character they remember. There are also songs you may not have heard if you’ve never seen The Little Mermaid on stage.

Bryan hopes the audience will walk away from the show seeing the underlying message that is more than the love between Ariel and Eric and see the father-daughter relationship as well. “We can be harsh, but sometimes we have to let them make their own choices, even if we think they’re mistakes.” And if we’re lucky, they’ll end up happily ever after.