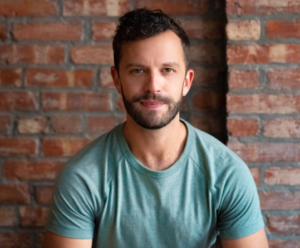 How did you first get involved in theater?

My first experience in a show was in 8th grade. I tried out for the High School’s annual fall musical, which happened to be Annie (not my favorite show), and was cast as Bert Healy as well as the ensemble for the show. The first scene I was in, I was supposed to be an angry, poor bum on the streets. I’ll never forget when the lights came up on opening night I was smiling ear to ear and could barely contain my excitement…far from the angry, poor bum that I was supposed to be portraying!! That was the moment I realized I wanted to do this for the rest of my life. BTW, I have been in Annie one other time, played in the pit orchestra once, and even saw the revival on Broadway … still not a fan 😉

How did you make it to the bigger, national stages?

I started attending open call auditions in NYC and auditioning at theatre conventions when I was in college. My first paid job performing was at a theme park in central PA the summer before graduating college. I landed my first paid book musical the month after graduating and started to work in professional regional theatres across the country after that.  I then booked my first international tour and performed throughout South America and Mexico, followed by a cruise ship contract and then five additional national tours (one even taking me to perform throughout China for a month). I have had the opportunity to perform on some of the biggest theatres in the country from LA to NYC and many theatres in between.  Now, as a creative on the other side of the table from performing, I have had the opportunity to create and work on shows that have toured the country and have delighted audiences in some of the very same theatres I once performed at.

You’ve done a lot of different jobs along the way when it comes to productions. What’s your favorite one do to?

One of my absolute favorite jobs is working with background singers in the recording studio and laying down background vocal tracks as their Music Director or Music Supervisor. I have had the opportunity to work with a few different companies that accompany their live performances with a thing called “sweetener tracks.” This is typically the chorus of a song and/or background “oos” and “aahs” kind of thing. This helps “beef up” the vocals and support the live singers on the stage. I have been lucky enough to have worked with some of my dearest friends in the studio and I am always blown away by the finished product. I have all of the final audio mixes of the projects I have worked on in the studios. When I’m having a bad day, I open the files and listen and am instantly in a good mood! Some really great memories there!

What’s your favorite role and why?

I played Frank Pontipee in Seven Brides for Seven Brothers at Arizona Broadway Theatre back in 2014. I was so nervous going into rehearsals because it is a very big dance show and I knew I was going to have my work cut out for me. I ended up having the time of my life and met some of the most incredible and talented performers. I grew immensely with that production. That particular cast clicked and became very close and much like a family. I’ll never forget how emotional everyone was on closing day. The show was stunning and I am incredibly proud to have been part of that show to this very day.

What’s your dream role and why?

I had the very unique and rare opportunity to play the role of Connie in a gender-blind casting production of A Chorus Line in NYC in 2017. It was actually a very special show for me because it was the last show I performed on stage in before jumping full time over to the other side of the table on the creative/production side of things. I love A Chorus Line and very much have lived and have related to the lifestyle of the characters in that show at one point or another in my career. It was a very special show to be a part of and I was in the room with some incredible people and it is a show that I hold near and dear to my heart. If I had the opportunity to do this show again, I would say my dream role would be to play the role of Mike!

Why York? What brought you here?

In all honestly, the pandemic. I was on the road with the National Tour of Baby Shark Live as the show’s touring Performance Director when the world shut down in March. I found out that the producers were pulling the plug on the show during the final megamix of the show one night when we were performing in Wisconsin and we were all on planes heading home the next day by noon. Theatres, along with the rest of the world, began shutting down and most of them have yet to re-open their doors. Live Entertainment Professionals are still majorly affected by this pandemic. My lease was coming to an end in NYC and with there being practically zero professional entertainment jobs available, I chose to leave NYC and find more comfortable living accommodations during these unprecedented times. With a few friends already living in the area and a few small work opportunities here and there, York it was! I grew up in Western PA so it’s nice being closer to my family as well.

What attracted you to DreamWrights (other than living below the boss)?

I had the opportunity to be a Teaching Artist this summer for DreamWrights’ Summer Theatre Camp and taught the Dance Conservatory portion of the camp for a week. I had heard about DreamWrights through Ann, the Executive Director (and also my landlord) when she mentioned she was looking for a Teaching Artist for one of the summer classes. She offered for me to come over to DreamWrights and take a tour. The moment I walked into the lobby, I knew this was going to be a special place. I was really blown away by the entire space. York is incredibly lucky to have a theatrical organization in the area that is able to provide turn-key productions under one roof. I have not had the opportunity to see anything on stage in-person due to the pandemic, but my creative imagination runs wild when I think of what COULD be done in a space like DreamWrights.

What are some of the ideas you have to bring even more creativity into our space?

Although this is an interim position, I am looking to offer my skills, knowledge, and experience in the arts and live entertainment to provide opportunities or ideas that will benefit DreamWrights. Whether it be through creative brainstorming with the team to come up with new innovative ways to produce and provide arts through virtual experiences, providing artistic input in other areas that will raise the bar at DreamWrights, or creating safe in-person experiences, I am excited to work with the team and look forward to seeing some of these opportunities and ideas come to fruition.

Any other tidbits about you that others should know?

Time for some RAPID-FIRE QUESTIONS!

Cats or dogs? Dogs
Pancakes or Waffles? Big fluffy Belgium Waffles
Day or Night? Day
Winter or Summer? Summer (also love a Fall moment!)
Up or down? Up
Coffee or tea? COFFEE!!! (but am not against a cup of tea!)