We sat down with David Lee White and Kate Brennan, the writers of “ALiEN8”, to discuss their creative process, how writing a musical is different than writing a play, the themes of the show, and their favorite moments from the musical.

Q: How is writing a musical different than writing a play?

KATE: Plays can be extremely lyrical. They have music and rhythm even if there are no notes. Practically, though, a musical has many more moving parts. There are so many possibilities for types of songs, placement of songs, vocal parts, instrumentation… All of that takes time and work. It feels like the difference between wrestling a marlin or a whale into your boat. You always need a good crew. But you are gonna need a lot more help to get that whale into the boat. And you’re probably gonna need a bigger boat.

DAVID: When I write a play, I’m typically by myself, with my computer. The process of trying out material, experimenting with dialogue and things like that, generally happens in my head. Until I’ve written a full draft of a play, it’s a pretty solitary experience. But because Kate and I like to bounce ideas off of one another and our collaborators, the process for these musicals is very group oriented and active. While we still have to occasionally retreat to our own corners to write or compose, the essential creative activities take place with a large group of artists in a rehearsal room.

Q: Can you tell us more about the process of songwriting?

KATE: As songwriters, we are trying to share a story, yes, but we are also trying to share an experience. We are striving to conjure an atmosphere, and build a world. But also we hope to invite the audience to become participants in that world so that they practice big emotions in a safe space along with our characters. We are opening the door to empathy, to understanding, to new perspectives, to discussion. A character breaks out into song is because the moment is too emotional for speech. The music bursts forth to convey the magnitude of the moment. The songs of The Infinity Trilogy are less about advancing the plot and more about revealing the rich emotional life of the characters – their secrets, wishes, hopes, dreams, fears. The songs are the heightened language of the piece – the method that allows the work to become universal and transcendent. Music is a part of all of us, from the heartbeat in the womb to the constant thrumming inside our own chests. Grand ideas, to be sure. But also, sometimes, the role of a composer/lyricist is about simply solving the problem: “how do we cover this scene change?!”

Q: How would you describe your process working together?

DAVID LEE WHITE:  While Kate generates all the music and lyrics and I write the scenes, we tend to work in tandem. We don’t really decide what the story is about going into it, instead, discovering it along the way by combining lyrics, bits of dialogue and music. Our favorite method for creating these pieces is in the rehearsal room, with young theatre artists. Sometimes story elements will come from their improvisations. Sometimes they’ll create characters that will wind up as characters in the show.  We explore themes and images for a long time before actually committing to a story.

KATE BRENNAN: David knows craft and I know chaos. I often generate a bunch of random dissociated material and David comes in with a golden thread to weave the story together. Then once we have a loose fabric, we patchwork more together until we craft the whole tapestry of the show. I will bring a handful of songs and David will bring a handful of scenes and we collage the piece together with an ensemble. From that ensemble work, we start to discover the missing puzzle pieces. As the ensemble brings themselves to the piece, the piece begins to take shape. Every time we start working with an ensemble, we do a talent show, which allows everyone to bring a special skill to the process – poetry, dance, ukulele playing, baton twirling, you name it. Through this group collaboration, we create something entirely original that was not possible before we came together.

Q: You wrote ALiEN8 using this method through teen workshops. What was that process like building with an ensemble and what made you want to tell this story?

KATE: ALiEN8 is the first in a show cycle developed with and for young artists called The Infinity Trilogy. David and I are lifelong theatre artists and educators. We longed to see the funny, weird, joyful, whacky, searching, lost, compassionate, questioning roles that we never had in theatre growing up. There has long been a dearth of opportunity for young women, for actors who do not fit the role of ingenue or sidekick, and we felt strongly about remedying all of that. But even more than this, we wanted to create a meaningful ensemble experience, to listen, to connect, to forge community through our work.

DAVID: Most theatre education begins with acting. Young people are put into a show as performers, and from there they might find other things in theatre to pursue. I’ve always felt very strongly that students should study theatre from the very beginning – writing and devising. Usually, by the time actors get involved in the process, the show is either finished or well on its way to completion. I think this gives students an incorrect idea of how theatre is made. So even though our first workshop for ALiEN8 was only three weeks long, we wanted to give the artists the experience of watching – and taking an active part in – creating a show from the beginning. On the very first rehearsal, the only things we had to work on were a couple of vague scenes and a few songs that Kate had based on essays the students had written prior to the program.

KATE: We would bring an offering of material into the workshops- scenes, songs, and we would play. What would this be like with movement? On its feet? We’d read the material, we’d learn the music. We’d discuss. Then David and I would discover new scenes, characters, songs. In time, the piece starts to take shape – with theme, plot, characters. And then it is our job to serve it. How can we best share this story that needs to be told that was born of our collective subconscious? How can we do justice to these characters who need to be heard, who are all a part of us? We are not only developing new musicals; we are empowering young artists to use their creative voices to forge their own narrative.

Q: What did you find challenging bringing this musical to life? What have you found most surprising?

DAVID: I think the biggest challenge of creating any musical is just getting people to pay attention to you. There’s so much new work out there and work that’s in development that it’s difficult to catch someone’s eye. Thankfully, people seem to have noticed ALiEN8. I think my biggest surprise was the ownership that every ensemble has taken of the show. I’ve talked to actors who tell me things about the characters that I had never even thought of before. Often, they’ll have theories about who 8 is or what 8 represents that we never intended.

KATE: It takes a lot of time, support and resources to get a musical from a seedling idea to a fully-realized, produced, published piece and ALiEN8 went from its first note to premiere in a little over two years. That’s actually a very fast trip! I think the challenges for every artist are time, resources, and support. There were so many surprises in creating ALiEN8: the gestural language, the evolution of the characters and storyline, the songs “Co-Creators of the 21st Century,” “What I Mean,” “Is Anybody Out There” and “If Only” in particular. I am perhaps not surprised, but really interested, in just how much of an ensemble piece it became. It’s exciting to see so many different characters with their own stories and hear so many different voices with their own songs. It feels expansive and dimensional. It really reminds me of what it is to be in community. I am surprised by how resonant the material is and how topical the songs seem even though we started the work five years ago. It is a real goal as an artist to create work that is both timely and timeless. I hope that is possible with ALiEN8.

Q: ALiEN8 explores themes like inclusion, exclusion, shame, forgiveness, otherness, and belonging. Why did you want to explore these topics and what do you hope the audience takes away from seeing this show?

DAVID: It wasn’t really a choice we made. These were the things on the minds of the students we worked with. But certainly, Kate and I both related to all of these things in our own ways. In creating the show, we tried to create scenarios that would allow the actors to bring their own point of view to the characters they’re playing. There’s a reason why the events of ALiEN8 don’t have a definitive explanation. We wanted the ensemble, and the audience, to bring their own experiences into the story.

KATE: The themes choose us. I think the way that we approach creating our pieces invites what needs to be said to be said though them. We don’t start creating a piece because we have a specific premeditated story to tell. We start a piece because we need to create something and there are voices who need to be heard. When we listen, this is what they say.

Q: What is your favorite moment in ALiEN8?

KATE: During our second workshop of ALiEN8 at Oklahoma Contemporary in Oklahoma City, a child who was maybe 4 or 5 saw the show with his parents. When he got home, his parents sent us a video of him. He was doing the intimacy gesture from the show. That was extremely moving. So I think the gestural world of the show is my favorite part. And it will be an ever-evolving, unique yet universal experience for every production of ALiEN8 because every cast creates their own gestural world. Each new ensemble will take ownership and imprint upon the work by creating their own language to bring to it.

DAVID: As far as the show itself, the finale – “Is Anybody Out There” – sends chills up my spine every time I hear it. As an educator, I also love “Co-Creators of the 21st Century” because it speaks so much to the impact we hope we have on our students. I also love the scenes in the band room where we see the gestural language travel from person to person.

ALiEN8 runs from September 16 to the 25th. Get your tickets here.

Lobby doors will open one hour before show time allowing access to the ALiEN8 inspired art exhibition created and curated by Priscilla Tellado. This exhibit will also feature art from Amber Shellenberger and the cast of ALiEN8, community art projects for patrons to participate, and young artists performing nightly on our teen sharing stage.

You can learn more about David Lee White and Kate Brennan at their websites – https://davidleewhite.net/ and https://www.katebrennan.org/ 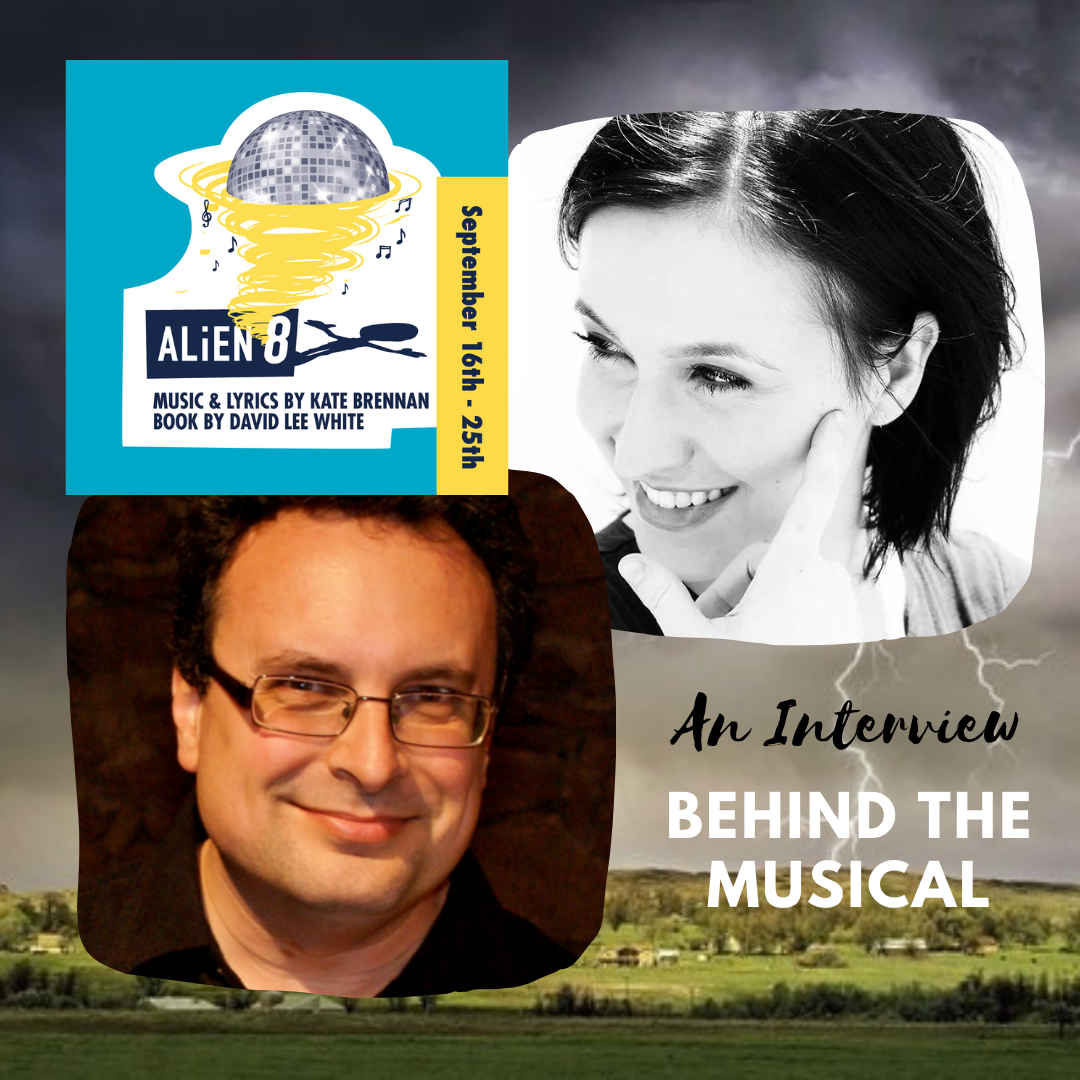