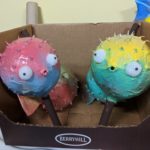 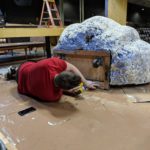 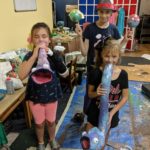 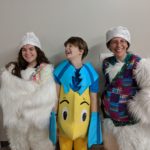 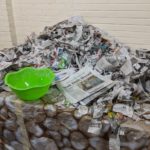 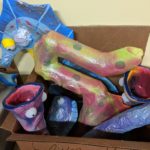 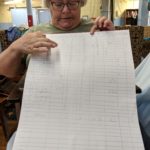 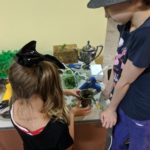 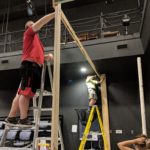 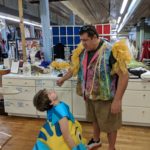 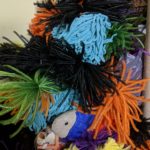 Hello, everyone! It’s Kate here, your marketing coordinator. The production of The Little Mermaid has been the first time for me to see a DreamWrights production from audition preparations all the way to closing night. Recently, I spent the evening with several of the crews making things go smoothly behind the scenes. It gave me a whole new look at what it takes for these companies to produce such great shows at DreamWrights.

Our main stage looks a little different for this production and it’s causing some extra work to be done for the show. With the new alley format for The Little Mermaid, Bob and his volunteers were hard at work building a staging area at the entrance of the room. They need a place to have boats, coral, other props and of course, actors who need to enter from that direction throughout the performance. They’re building massive 180-degree gates to not only open to allow patrons to enter without seeing the stored props but also that serve a purpose during the show itself.

The most difficult part of this build? The boats. The scenic crew has been working hard to build Eric’s large ship which will roll into the stage, but also the small dingy for what they’re calling the “no kissing” song – “Kiss the Girl.” They’re also building a “water ski chariot” for Eric and Ariel to ride off into the sunset at the end. Some of Eric’s boat is constructed from pieces left over from when the DreamWrights building was a furniture factory.

Bob’s had a couple dozen helpers throughout the build, which he needed as the show is 23 scenes each with at least one different piece of scenery they need to construct. There are clam shells, thrones, a kitchen and more to be constructed before the show opens Oct. 12.

The costume room was quiet when I walked in, only punctuated with the sound of Rebecca working on one of the sewing machines. What’s the most difficult thing about this show, I asked her. She laughed as she said 90 people, and got up to get a chart to show me. Not only are there 90 people to outfit in this double-cast musical, but many of the actors play several roles – like seagulls, sailors, marine life, etc.

Luckily, Rebecca said a handful of costumes were borrowed from West York and Kennard-Dale school districts which saved some time on Sebastian (which would have been the most elaborate) and some of the main seagulls. But borrowing from schools is difficult in this case since many of our marine life are adults and don’t fit in those costumes. There are 20+ adults that need new marine costumes made.

Another thing I didn’t really think about is that there is very little crossover when it comes to each cast and the actors. Most need separate costumes since they’re all different shapes and sizes.

Rebecca is grateful for her volunteers, some of whom had only hand sewing experience prior to this. They’ve been hard at work on the pieces many of us don’t even think about – like 130 fish tales for vests, 54 seagull hats, double that when it comes to seagull feet.

I am a sucker when it comes to getting to play dress up, but the work this company has done on props was the most fun to check out. Led by April Bennett and Jacob Schlenker, most of the pieces have been done by paper mache. We’re talking brightly colored instruments made to look like sea creatures – from an eel tuba to a seahorse harp and blowfish maraca (my personal fave). All of these pieces and four giant pieces of coral have been made from paper mache. The kids on the crew have been busy making strips of newspaper, cutting sequins to make fish and yarn to make sea anemones just to name a few.

Luckily they’ve had lots of help from parents and siblings willing to work while others are at rehearsal.

We cannot wait to see all of these important behind-the-scenes elements come together to create a magical night for The Little Mermaid.