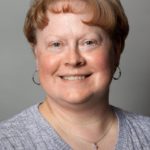 “Are you going to write a book,” Susan Conway asked with a laugh as she sat down to recount her nearly 17 years with DreamWrights.

The first time she entered DreamWrights was to see a family friend’s son in A Christmas Carol. That friend would later be the one who told Susan about the job opening here – the first full-time office manager.

Susan has held that same job all these years, though the tasks have changed a lot. A whole lot has changed in general, actually.

DreamWrights has gone from a small “in your face” theatre to the black box, and back to that small studio setup. Tickets used to be sold by phone, walk-in or mail only. DreamWrights had a “very primitive” handwritten method of logging our tickets.

“It made it exciting when people exchanged tickets,” she said.

Susan was one of two paid positions when she started. She’s witnessed the creation of the costumes position, the directors of education, Bob, and four other executive directors.

There were no phone extensions then, just three lines and you just answered when they rang. There was one email account, and it was a Juno account. Dial-up Internet was here, so you logged in and waited … which we still do sometimes.

When she started, DreamWrights had only 4 shows a year. A few years in, the 5th summer classic was added. Plus the theatre under the trees. It went up to 8 shows a year and held there for a while. The 2019 season slate is a whopping 12. Don’t forget the name change, too.

And one of the biggest changes, she got a window some 15 years in. A window to see people walking up before they entered the office, a window to the rest of the world outside where she’ll now step into as an administrative assistant for the York Suburban School District.

“It’s the people I’ll miss the most,” Susan said as another visitor stopped by to say goodbye before her last day. “I know there are people at every job, but this was unique. Those relationships, those were special.”

Join us as we wish Susan well and thank her for her years of dedication to DreamWrights. We expect to see her coming back for shows here and there!