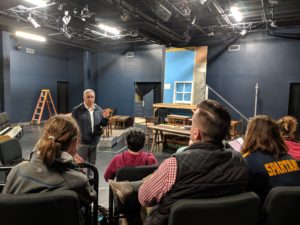 “I remember it like it was yesterday,” Dani Fessler told the Yours, Anne company.

The York JCC CEO who moved to York from Israel about a year ago stood before them, his backdrop the attic in the annex where Anne Frank and her family hid during the Holocaust.

Fessler was in 6th grade and lived in Basel, Israel, and by then, of course, the students had read the diaries, he told them. The diaries of Anna.

“He was a very handsome man, and tall,” he said. “He came into the class and we all stopped and said ‘wow.’ This is someone important. This is something very special.”

During the war, Frank was seen as an asset, Fessler said. He was sent to work. All the while, he didn’t know his family had been murdered the first day they arrived at the camp. So when things finally ended, Frank tried to make his way back to Amsterdam, but couldn’t. He went looking for information about his family, but he found the horrible news that he was the only one who made it.

“You can say a lot of things about the Germans, but they knew how to keep records,” Fessler said.

Frank made his way back to the family that helped them and they had kept four or five of Anna’s diaries. Frank didn’t know how in depth she went with her writings. And he dedicated his life to his family, by his family, Fessler said. 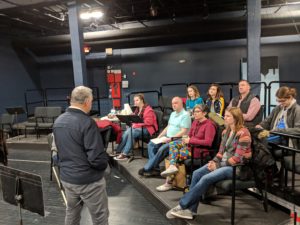 “I’m here because of her,” Fessler said Frank told the students. “That’s the only reason for me to live.”

Frank dedicated his life to telling his family’s story – through Anna’s words. They were translated into more than 25 languages.

He helped create The Anne Frank Foundation and The Anne Frank House – a museum in the home where they once hid. The home Fessler has visited three times.

A few days after meeting Mr. Frank, Fessler said he was telling his aunt about it, and turns out that Frank lived in her building. Fessler asked if he could come upstairs to thank him for coming to speak with them. He took a few minutes and shook Mr. Frank’s hand.

“It was a life-shaping experience,” Fessler said. “These small moments can be … they show you it’s alive, it really happened.”

He thanked the Yours, Anne company for being a part of the history in telling the story. You can be a part of it, too, by coming to see the show that runs March 14-17.