Bridge to Terabithia Offers Strength in Times of Grief

Jackson Smith (left) as Jesse and Morgan Burkhardt (right) as Leslie in DreamWrights’ Bridge to Terabithia.

Based on the Newbery Award-winning novel by Katherine Paterson, best friends Leslie and Jesse create their own imaginary kingdom in the woods to escape the realities of home and school.  Bridge to Terabithia is a poignant story of imagination, friendship, love and loss that builds a connection to the meaning of resilience.

Guest Director, Kevin Alvarnaz explains, “While the main themes of the story focus on friendship and imagination, the story goes much deeper. It shares that there is hope in the face of life’s many challenges, whether those be bullying, not fitting in, and even the loss of a loved one. With all that’s occurring in the world around us, we need to recognize that hope remains, even despite the most difficult of circumstances and experiences.”

In order to help the companies of the production better learn to portray the bereavement process, Alvarnaz brought in Julia Dunn, Program Director of Olivia’s House, a local grief and loss center for children to help educate the group. Dunn explains, “We wanted to enlighten the casts on what the Bereavement Process looks like, drawing on specific parts of the script, so that they could comfortably and accurately embody that process.” Dunn says that many of the children in the production jumped right into the discussion about bereavement. Some even courageously shared their own experiences with loss, and related to the experiences that the characters go through in the play.

Morgan Burkhardt, a sixth grader in the Central York school district, plays the free-spirited character of Leslie. She says she learned that there are four stages of grief. Morgan suggests, “Loss can be hard but you should think on the brighter side.” Caitlyn Barshinger, a 7th grader at Northeastern, who plays the bully Janice Avery, says she learned that sometimes those grieving will turn to bad behaviors but she vows to encourage friends experiencing grief to make better decisions when dealing with their feelings. She promises, “It gets better. You think it won’t, but it will.”

York Academy 8th grader, Troi Steele who plays the unconventional teacher Miss Edmunds, has experienced loss first hand.  She relates to the grief in the story, “In the end I think Jesse starts to learn from his loss and grow as a person. A lot of people say it gets better. And that is true because I’ve lost people so many times.” Troi says that she uses a stress ball to cope when she’s lost someone or something dear to her.  Wise for her age, Troi believes, “No one should stop trying because life is like a mountain. There are some smooth parts, but there are also rocky parts that you have to learn to climb over that so you can reach the top.” 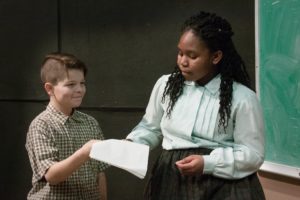 Alvarnaz ‘s wish is that the story helps people realize that there is hope no matter what they are facing or what is happening in the world around them. “Jesse and Leslie initially find hope in each other.  But then, because of circumstances, find hope in others. More importantly, they learn to pass along hope to others’ facing challenging times. Our lives truly are intertwined and daily we have the opportunity to positively impact someone else.”