Behind the music – The Little Mermaid 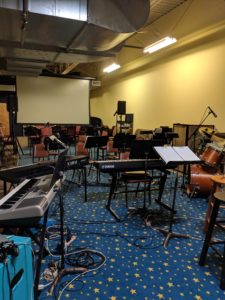 You probably know a lot of the iconic music from The Little Mermaid by heart. And a production would definitely not be the same without the music. But during the show, you won’t see the musicians. The 10-person orchestra is tucked upstairs watching their conductor, Music Director Kevin Alvarnaz only as he watches a screen of the company on the stage. And Kevin is watching the performers waiting to cue up the music only at the right time. With a show like this, the musicians know the stakes and the audience’s expectations are high. And they aim to please from above. 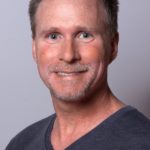 For Sound Designer Dave Unger, getting everything up and running in the upstairs orchestra pit has been a labor of love. The Little Mermaid is the second show that will have music played upstairs and not in a normal pit sense. He’s working with all new equipment and a much larger orchestra this time. He knows about 70% of it but needs to know 100% of it now. The old way of doing things was much more restrictive, Dave said. This allows the actors to sing more naturally without cues, and the music can start and end at the direction of the music director who’s watching the stage. It also keeps musicians from being distracted by what’s happening on stage.

“We have to do it for our own pleasure,” Dave said of the musicians. Sometimes it’s hard to know you’re actually being heard down on stage, so he encourages them all to step out and watch from above at times. “We do it for the love of it,” Dave said. 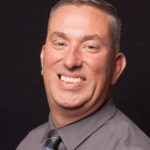 The musicians have been working for over a month now, and the music director says things are going well. The first time the entire orchestra performed with the rest of the company, Kevin felt it was “the smoothest meeting of the two we’ve had in a while.” This orchestra has a handful of musicians who have been in the DW pit before, but many new faces.

Kevin, like Dave, said the expectations are high for music in a show as well-known as The Little Mermaid. They’re working with a keyboard that can be played as a regular keyboard, but also do other sounds – like the harp or marimba – to make it as authentic as possible. And there has to be a lot of trust. First, on the part of the actors that the music will come if they sing. And for the musicians, that Kevin is watching and the show is continuing.

Kevin’s favorite song in this show is The Storm because it features more of the instruments. The most challenging – Under the Sea for it’s fast, upbeat tempo and the fact that EVERYONE knows it.