No stranger to the stage, but new to DreamWrights 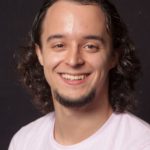 Dante Strange is no stranger to the stage in general, but new to DreamWright’s stage. Dante has been spending his time music directing in past years and was looking for a show to hone his skills and brush off the dust. He saw DreamWrights was doing The Little Mermaid and thought he might fit the type for Eric.

He was right. Dante will join us on stage this weekend for the start of Disney’s The Little Mermaid as one of the two Erics. With well-known characters like Prince Eric, Dante said he started with the originally-portrayed character and is building his own. He’s sure his Eric will be similar at his core, but vary from the movie and Broadway versions.

“It’s about creating a way to connect with characters, relating past experiences to your own,” Dante said. Eric’s dad died and he grew up with no father figure. Dange knows loss as well, as he lost his grandparents when he was younger.

Dante has experience in double-cast musicals; he’s been working with Weary Arts Group in The Wiz, but in that show, it’s just the lead roles that are double-cast. He’s enjoyed his experience at DreamWrights getting to know other directors and company members. Most of the people he knows are in the other company so he’s gotten to meet new people and spend time working in the alley stage setup.

Dante’s spent a lot of time on and behind the stage, but he’s still excited to show off his version of this iconic Disney character. Dante’s first time on stage was around 2000 when he played a town boy in Cinderella. His favorite role? The Phantom of the Opera where he played the Phantom.

Dante hopes audiences will be surprised to see the musical is longer than the movie and is fleshed out with new songs and scenes. Eric and Ariel are prevalent, but there is room for other stories and themes, he added. It’s not just about romance, and it’s not just for teens and children, he said. It will be neat to see both shows as well since the double-casted musical allows for different interpretation of characters.